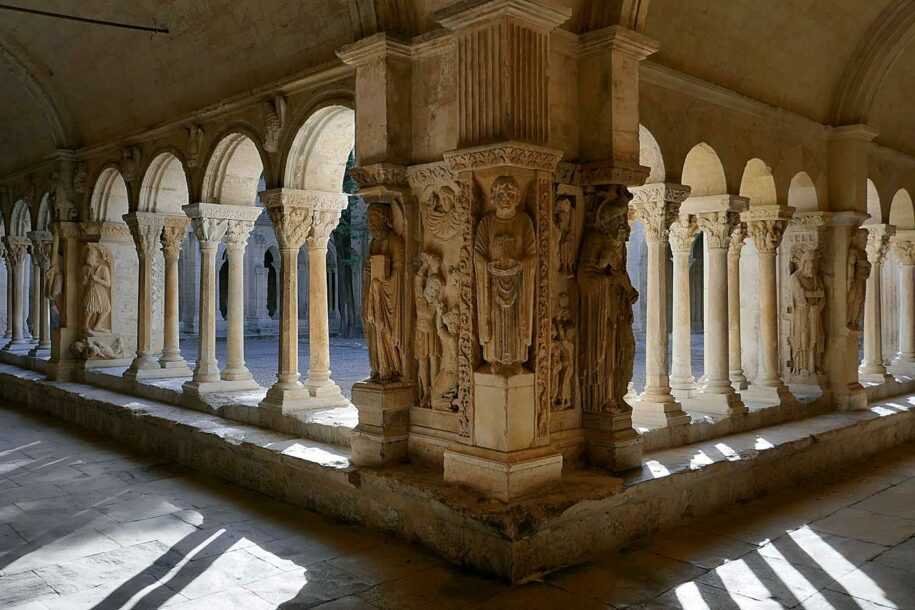 Fourth stop on our guided tour of Arles and its surroundings.

Made famous by Vincent van Gogh and Paul Gauguin who both painted it during their stay in Arles in 1888, the necropolis of Alyscamps – Provencal translation of “Champs Élysées” – had a very great influence in the Christian Western world in the Middle Ages. Redesigned during the 19th century, it takes the shape of an avenue of open tombs framed by perfectly aligned cypresses, leading to the Saint-Honorat chapel, a Romanesque and Renaissance jewel whose abandoned appearance gives the place a very romantic atmosphere.

After this excursion in the early days of Arles Christianity, it is time to join the Saint-Trophime primacy, the spiritual heart of the city. Its famous Romanesque portal will impress you with the richness and finesse of its sculpted scenes. Inside, the golden light of the chapel housing the tomb of Archbishop Gaspard du Laurens will seduce you, and you will be surprised by the ingenious recycling of ancient sarcophagi converted into altars. You will then set off to discover its marvelous cloister, one of whose particularities is to have a second path, suspended between earth and sky. When you leave, do not hesitate to push the doors of the former archdiocese, where interesting exhibitions of contemporary art and photography take place all year round, and which offer a magnificent view of the square of the Hôtel de town and the Sainte-Anne chapel, just opposite, where you can discover other exhibitions.

Exhausted by all this walk, you will be able to end your journey through Arles’ religious heritage at the Hotel Jules César: it is in the former Carmelite convent that this essential institution has settled, wrapped around a delightful garden- cloister and nestled against the baroque chapel of Charity. Entirely redecorated in 2014 by the brilliant Arlesian designer Christian Lacroix, the hotel invites you to relax in its Roman-inspired spa, to have a drink (a “Spritz de Madame Lacroix”, for example) in the greenery of its garden , or to savor the Provençal-inspired cuisine of its restaurant, Lou Marques. Enough to end your day gently, between tradition and modernity.

Passionate about religious architecture, several sites await you not far from Arles: the abbey church of Saint-Gilles du Gard and its marvelous Romanesque portal; the Saint-Gabriel chapel, nestled in the pine forest, or the Sainte-Marthe collegiate church in Tarascon, which faces the impressive medieval castle. Or the abbey of Saint-Michel de Frigolet, whose church, built in the 19th century, displays exuberant frescoes that stand out in the middle of the natural massif of the Montagnette.